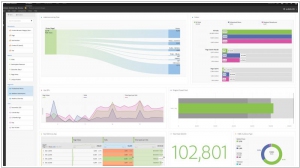 No matter where you are with your maturity with analytics, Adobe Analytics can help. It helps to bring all your data under one roof — from web and mobile to CRM and connected cars — for the clearest possible picture of your customer and your business. It provides robust and best-in-class tools to help everyone in your company turn all the customer data you’ve gathered in to what-, why-, and how-style insights that actually deliver ROI.
27
Tableau

Tableau complements your natural ability to understand data visually. Our breakthrough products let you create rich analyses and share your insights with colleagues in seconds. Connect and visualize your data in minutes. Tableau is 10 to 100x faster than existing solutions. From spreadsheets to databases to Hadoop to cloud services, explore any data with Tableau.
Adobe Analytics vs Tableau in our news:
2019. Salesforce acquires data visualization company Tableau for $15.7B